Wilkes Green Junior School was opened on 11 April 1967, with the Infant school opening in September of the same year.  The schools were established to ease the burden on the school populations in the neighbouring schools, Grove School and Rookery School.  Mr Jones, the first headteacher of the Junior school (1967 to 1987) has informed us that the land on which the school sits was formerly the back gardens to the existing houses running along Antrobus Road and Albert Road and were purchased by the local authority at the time.  The school build was not straightforward and the buildings had to be built on pile foundations due to the conditions of the ground. The site has been extended to include the grassed land known as ‘Millennium Park’, which was formerly part of redundant plant works and the ‘Nature Area’, previously owned by Birmingham City Council Housing Department. Both of these sites were acquired by Mr Mangat MBE, who was headteacher of the Junior school from 1987 to 2016.

The Infant school was placed into Special Measures by Ofsted in December 2016.  An Academy Order was issued against it meaning that it had to convert to an academy subject to receiving an appropriate academy sponsor.  It was at this point that Mr M Singh, started discussions with Birmingham City Council, the Department for Education and Ofsted, about the Junior school taking on the Infant school.  After the requisite due diligence and consultations with stakeholders, it was unanimously agreed by all parties concerned to amalgamate the two schools.  A formal launch ceremony took place on 26 September 2019, with a commemorative plaque unveiled by the longstanding Chair of Governors, Mr D R Chopra. 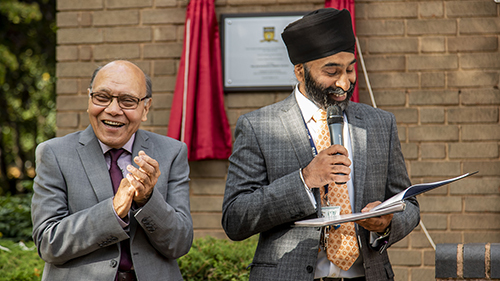