One of the most interesting chapters in the story of the progress of civilization is that particular one which tells of the coming of the railway.  With the birth of James Watt, in 1736, the age of steam dawned brightly, but it was not till after William Murdoch was born, eighteen years later, that the locomotive became a tangible idea. To this clever Scotsman belongs the honour of constructing the first steam engine that ever moved on wheels in England and of inventing coal-gas lighting.

William Murdoch was the second son of a millwright and after growing tired of employment in his father’s trade, in 1777 he walked to Birmingham and found a position with Boulton and Watt, the engineers. Both partners recognized that he had a natural genius for mechanics, and it was not long before they sent him down to Cornwall to erect their engines at different mines in that county.  Following his move to Birmingham he changed his name from Murdoch to Murdock to make it easier for people to pronounce.

Not content with improving on this firm’s productions, he became fascinated with the ambition to build an engine which would have the power of locomotion. Devoting all his spare time to this idea, he at last managed to construct a tiny little machine, standing on three wheels, about a foot in height, and with a spirit-lamp underneath the boiler to turn the water into steam.

One dark night, on returning from his work at the mines, he decided to try his little model on the straight road leading to the church, just outside Redruth. The inventor, trembling with excitement, lit the little spirit lamp and patiently waited for the water to boil. This happened sooner than he expected, with a puff and a snort the model started off at a good speed, with the excited Scotsman after it.

Murdoch’s efforts to invent a locomotive were soon brought to an end, for Boulton and Watt advised him not to waste his time on such idle and hopeless dreams. He, therefore, turned his attention back again to the improvement of the stationary engine.

During the 1780s Murdoch worked on a number of improvements on the basic design of steam engines, including a 'steam wheel' that, if properly developed, could have brought the steam turbine into use far earlier than it was. More immediately successful was his 'sun and planet gear', which allowed steam power to be turned into a truly circular motion. He also carried out a number of experiments with compressed air and developed the first pneumatic message system. This was developed by the London Pneumatic Dispatch Company and became widely used until the 1940s. He also experimented with steam cannons and steam guns, and by 1784 had produced a model steam carriage of a design more advanced and efficient than anything that had gone before.

During the 1790s, Murdoch turned his attention to the production of gas from coal. He initially produced enough gas to light a single room at his house in Redruth in Cornwall, and by 1798 he had installed an experimental gas lighting system in the Boulton & Watt works in Birmingham. Within a few years, Boulton & Watt were selling entire gas lighting systems to cotton mills, where the combination of lighting by candles and oil from the cotton had led to many fires. 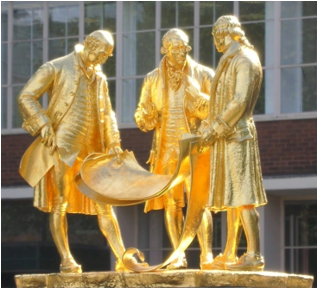 The Golden Boys as they were known, James Watt, Matthew Boulton and William Murdoch, pioneered the industrial revolution in late 18th century England.

In the midst of these and other repeated inventions and experiments, Murdoch was becoming an old man. Yet he never ceased to take an interest in the works at Soho Manufactory. At length his faculties experienced a gradual decay, and he died peacefully at his house at Sycamore Hill, Handsworth on the 15th November,1839, in his eighty-fifth year. He was buried near the remains of the great Boulton and Watt in St Mary's Church Handsworth, known as the 'Westminster Abbey of the Industrial Revolution'.